Fresh from my experiences with Raffles in Phnom Penh, it is fair to say my expectations were sky-high by the time I got off the plane in Siem Reap.

Over the past couple of decades, the city has emerged as one of the preeminent stops on the south-east Asia tourist trail, with thousands of hotels of all standards catering to the booming market.

My hour-long hop down from the Cambodian capital was thus packed with backpackers looking for adventure.

So what bliss, then, to be greeted by my raffish young driver, ready to whisk me to Raffles Grand Hotel d’Angkor in a classic Mercedes and away from the crowds.

Pulling up at the door of the hotel, gravel crunching under the wheels, I was beginning to believe this was the lifestyle I truly deserved, rather than being an interloper in this rarefied environment. 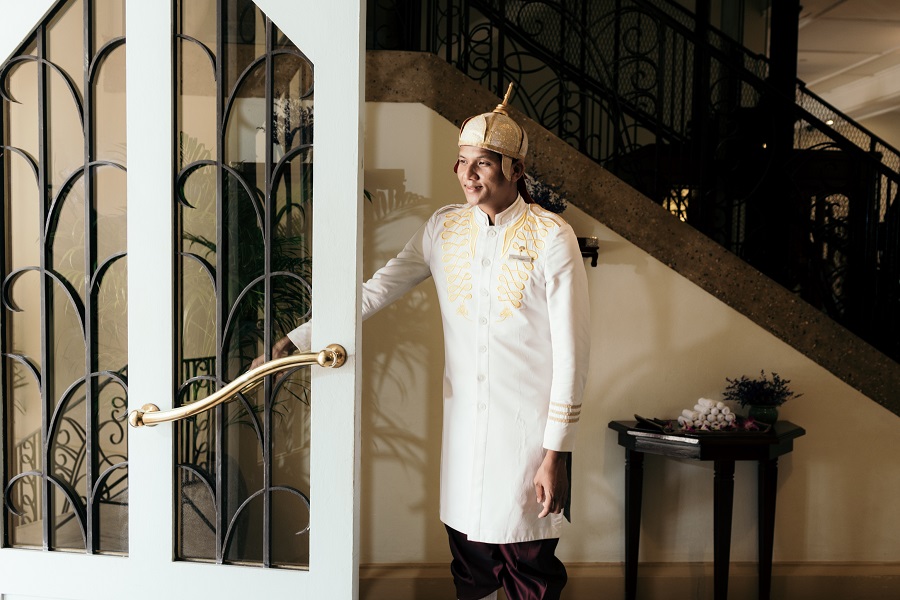 Raffles Grand Hotel d’Angkor itself traces its roots to mid-1920s and the French occupation of what was then known as Indochina.

As part of a scheme to build five properties (which also included the Raffles Hotel Le Royal), colonial authorities decided to construct a 40-room hotel in Siem Reap.

Designed by Ernest Hébrard, the original was conceived to replace rickety bungalows that could no longer accommodate the needs of the growing number of wealthy tourists heading to the ruins at Angkor.

Though, by the standards of today, the 2,817 well-heeled travellers that visited the temples in 1934 would have considered them delightfully empty.

After thriving in the mid-century, the arrival of the Khmer Rouge regime saw the hotel brought to its knees in the 1970s, along with much of the rest of Cambodia.

The Grand Hotel d’Angkor was deserted except for Pol Pot cadres who took up residence in a property stripped of all furnishings. 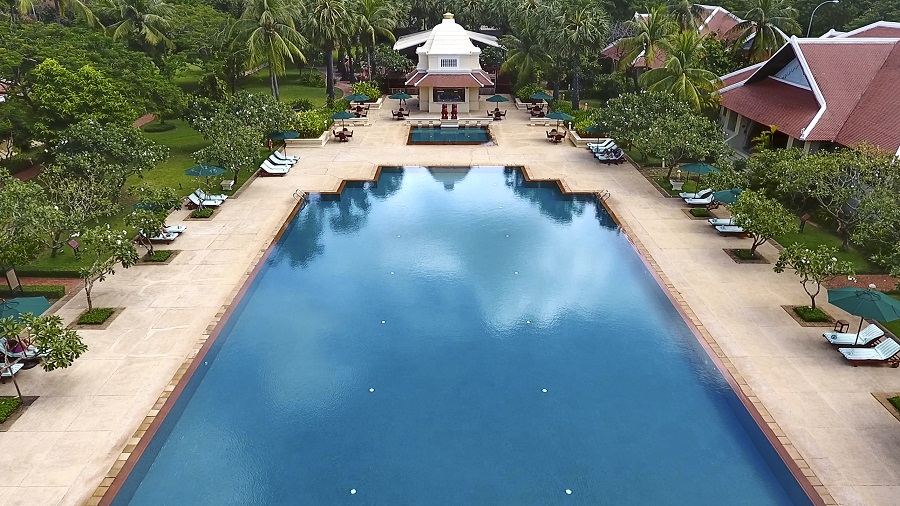 Bringing the story up to the current day, Raffles was invited by king Sihanouk to redevelop the hotel in the 1990s as he sought to rebuild his shattered country.

It gradually re-established its reputation as the most desirable location in town and has recently completed its latest renovation.

Reopening after a six-month closure only at the start of this month, Raffles Grand Hotel d’Angkor saw 112 of its 119-rooms and suites fully refurbished.

The work has left the classic charm of the hotel intact, but installed the modern flourishes now expected by global travellers.

Spotlights have been added to brighten the rooms, while power ports and USB charging stations have been fitted.

The French windows, which swing open to views of either charming street scenes or the plantation-style grounds of the hotel, have been upgraded, and each room now has a writing desk and vintage rotary telephone.

Though, it has to be said, for younger travellers, even digital versions of the classic phones are utterly incomprehensible.

As Oliver Dudler, general manager of Raffles Grand Hotel d’Angkor, explains to Breaking Travel News: “In Siem Reap we have two season – the high season and the ‘green’, or low season.

“This gave us an opportunity; we completely closed the hotel at the end of April and moved 300 workers in to get the place ready for re-opening at the start of this month.

“The careful restoration and refurbishments will enhance guest comfort by offering new modern amenities while staying true to our longstanding heritage and classically elegant ambience.”

He adds: “While the work is officially ‘complete,’ it is never really done; there is always more to do and improvements to be made.” 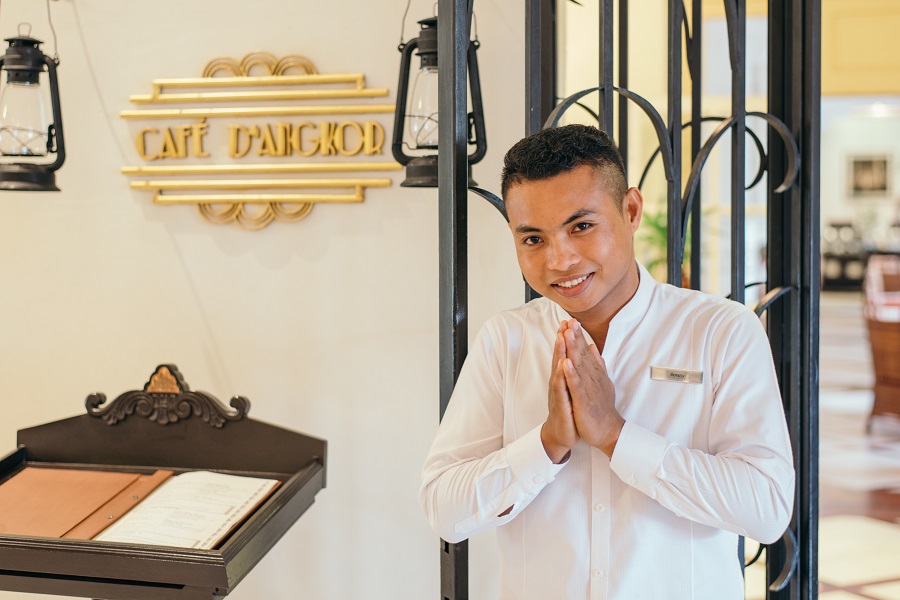 All I can say is that I cannot wait to see what the hotel is like when it is truly finished, today it is magnificent.

In my decade in the industry, it is rivalled only by Mandarin Oriental – Bodrum and Ashford Castle in Ireland in terms of quality – this is the real deal.

The main difference returning guests will notice is that the façade of the hotel is now painted alabaster white, rather than its former cream-beige hue which is the calling card of Royal Khmer architecture across the Cambodia.

Inside, workers have transformed the bathrooms, with all-new Italian tiling and fixtures, and separate rain showers.

The hotel’s Elephant Bar, renowned for its celebrity patrons, retains the air of a bygone era.

Contractors David Grace Designs have brightened up the Café d’Angkor, while refurbishing the interior design in the conservatory, famed for its afternoon teas and baby grand piano.

Throughout period architectural details abound, from the ironwork surrounds of the cage elevator, now beautifully restored to its former glory, to the floral-motif Art Deco railings on the floors above. 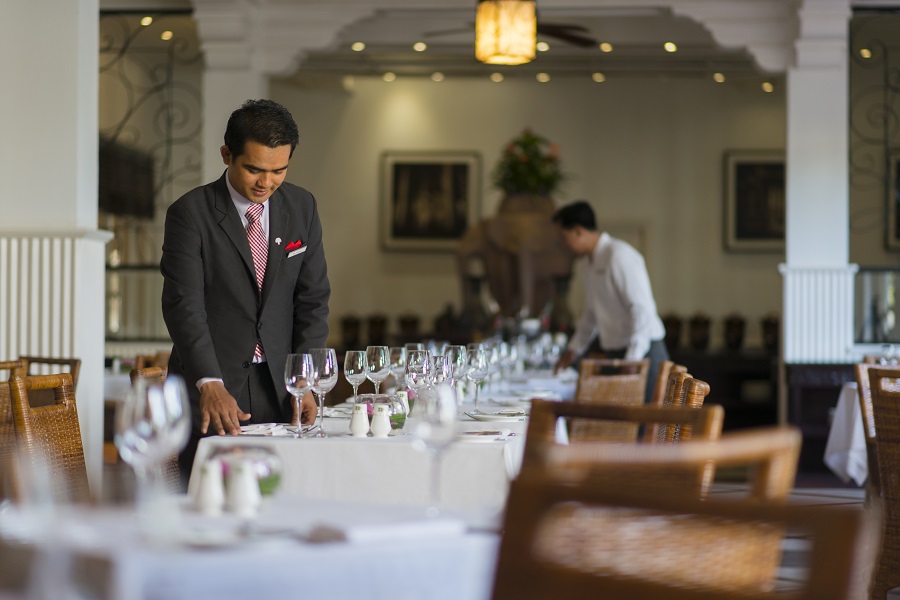 During my all-too-short visit I was accommodated in one of two splendid two-bedroom villas overlooking the pool.

Comfortably able to house a family of four, the floorplan is huge, with exterior verandas stretching out to offer even more space outside.

A chilled bottle of champagne is also a welcome sight on arrival, while the fresh fruit and sumptuous chocolates complete the experience.

In the bedroom, the fourposter adds to the historic feeling of the hotel, while the hardwood floors, marble bathrooms and fresh flowers mark this out as a place even the most discerning traveller would feel at home. 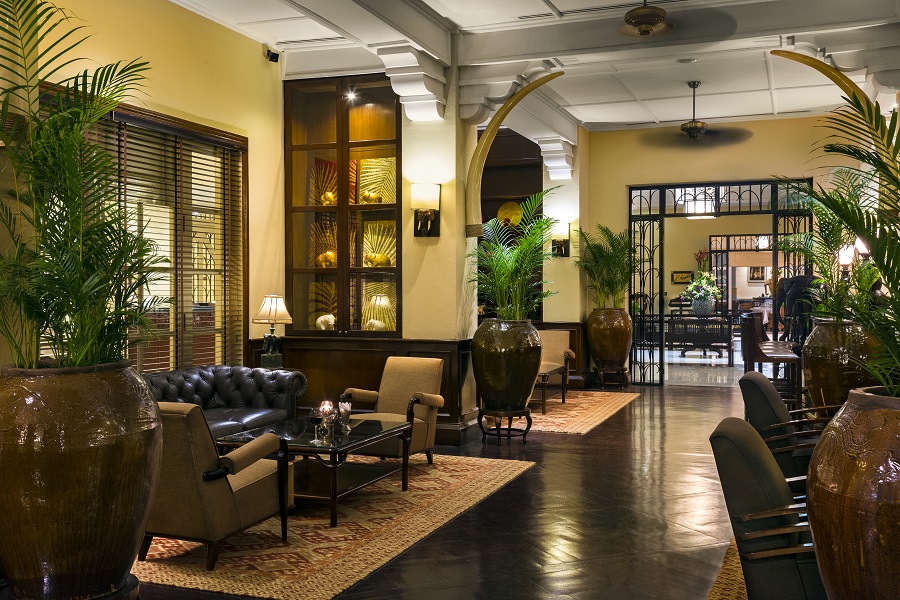 Of course, beautiful though it is, the hotel can never be the star attraction in Siem Reap.

The temple complex at Angkor is just eight kilometres away and can be easily reached by road.

During my stay, I was treated to a Vespa trip of the main sights in an excursion organised by Raffles; a great way to dodge the crowds and get as close as possible to the historic stones.

Getting up at 04:00, we set off bright and early, first picking up tickets (US$37 for the day) before speeding off into the darkness toward Angkor Wat.

Most of the thousands of daily visitors enter via the west gate, so if you can, it is highly advised to make your way from the east.

Our party were the first to arrive and I was granted a few silent moments to admire the temple in total solitude, before we rounded the corner to be greeted by hundreds of other tourists.

Only in the last decade or two has site has really become world-famous, having been recognised by UNESCO in the early 1990s.

Previous to this, and with Cambodia off the tourist trail following the impact of the Khmer Rouge, only knowledgeable French tourists and locals, perhaps a few dozen a day, made the trip.

Angelina Jolie, in her role as Lara Croft in Tomb Raider, also played a part, though the film was shot in one of the smaller temples nearby, not Angkor Wat itself.

Whatever the drawbacks of visiting today, this is a world-class sight worthy of repeated trips.

Now fully resorted, Raffles Grand Hotel d’Angkor is the perfect base from which to explore and an ideal location to unwind after a day on the trail. 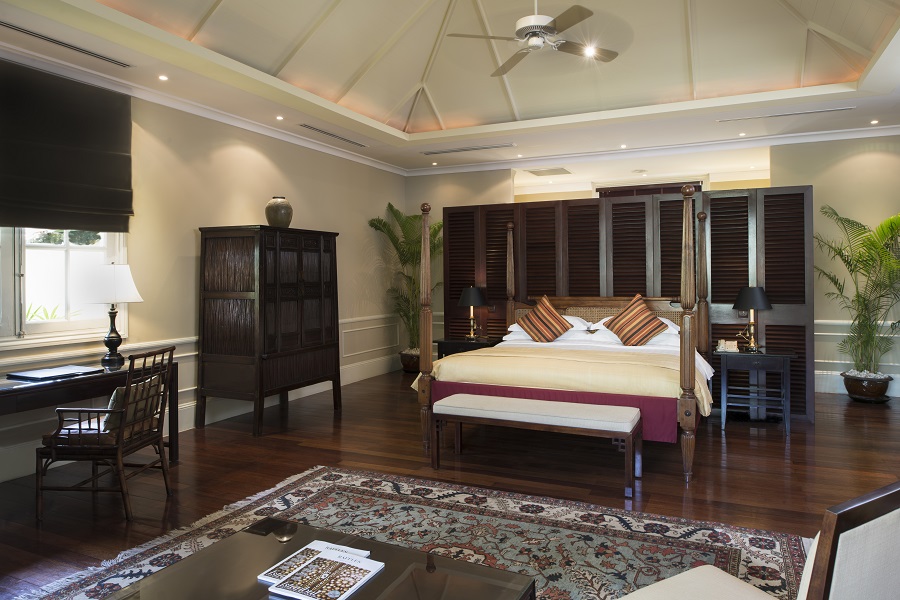 With 15 acres of gardens, Cambodia’s largest swimming pool and original features like the original cage-elevator, it is an ideal please to stay when visiting the UNESCO World Heritage Angkor temples.