The Dorchester London is one of the world’s most iconic hotels – it attracts a roster of A-list clients and even the Queen has visited.

And now the five-star luxury landmark is set to get a sister property in Dubai – but with very different styling.

The London property has warm 1930s aesthetics, but stunning renderings reveal how the Dubai version is strikingly futuristic, a towering glass and steel structure that will feature a rooftop infinity pool and offer spectacular views over the Middle Eastern metropolis. 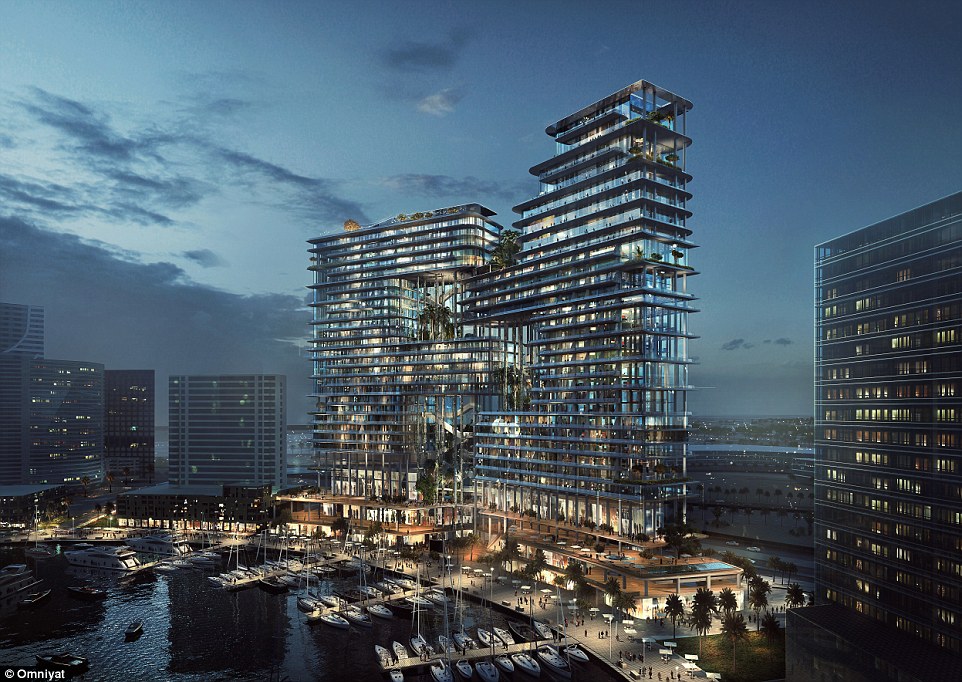 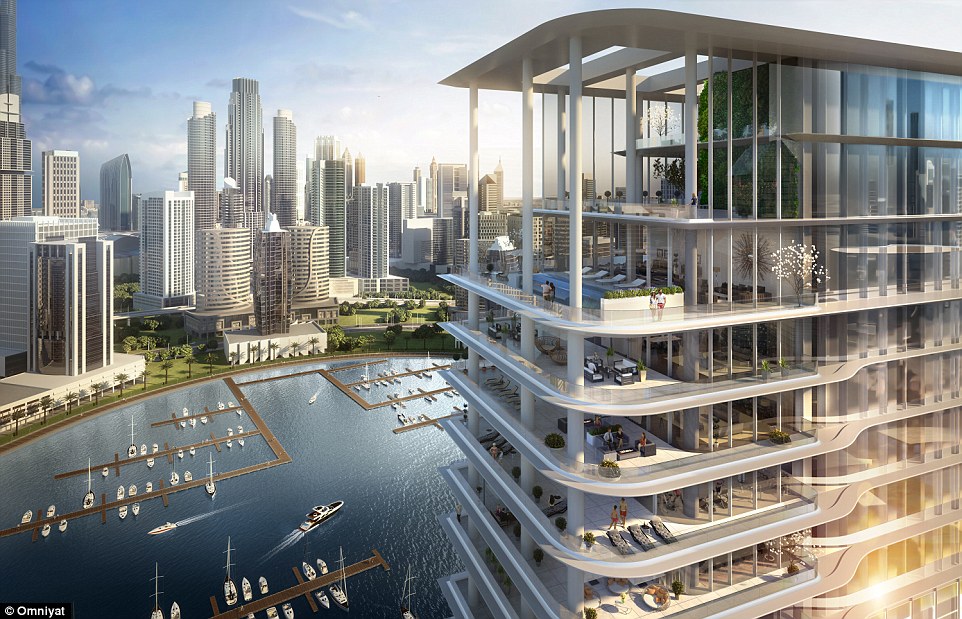 Hotel suites will boast floor-to-ceiling windows, with balcony areas providing space for guests to soak up the desert heat 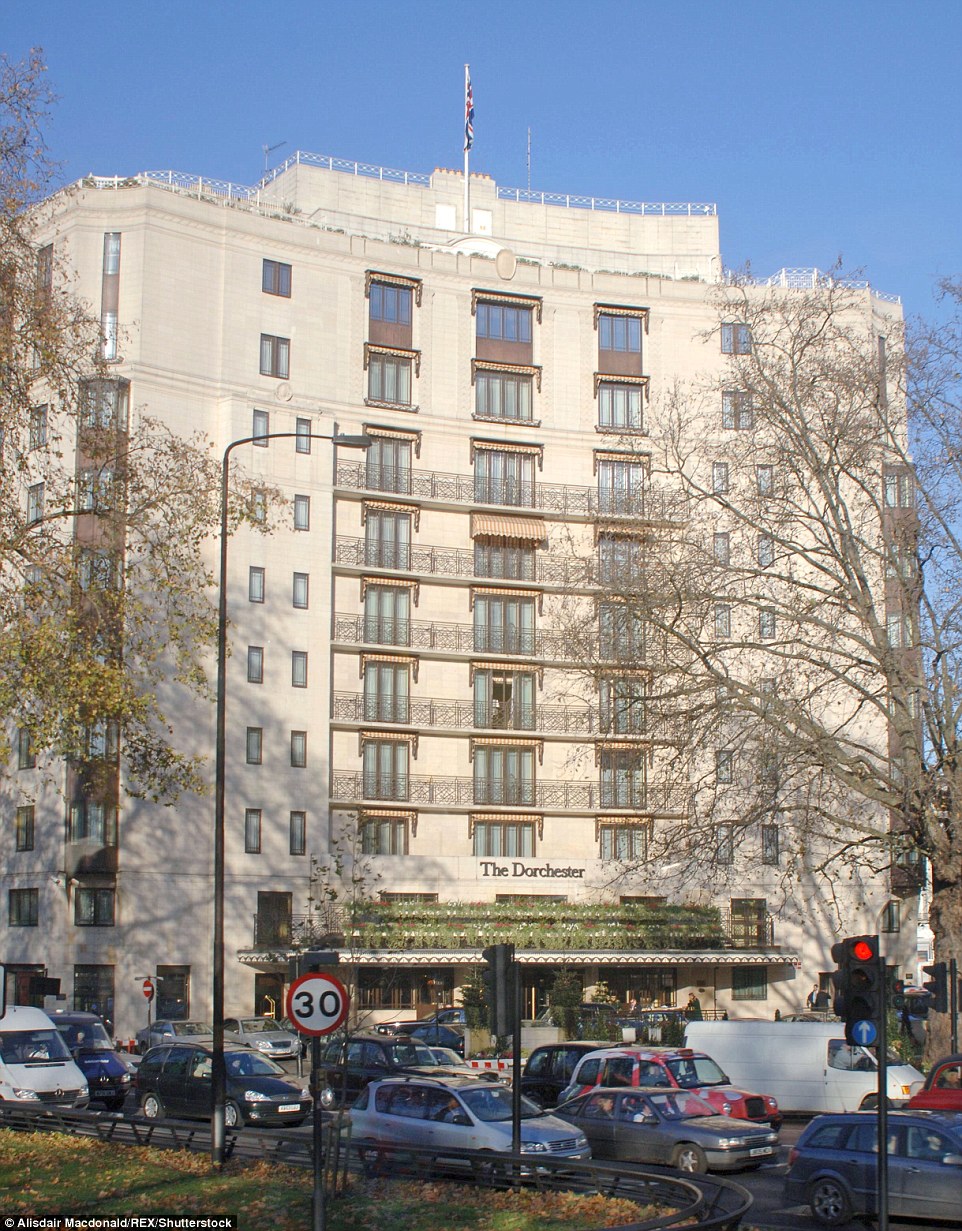 Hotel suites will boast floor-to-ceiling windows, with balcony areas providing space for guests to soak up the desert heat.

The preliminary design drawings suggest the venue – currently under construction in the downtown area next to a canal – will be decked out with contemporary furnishings both inside and out.

Along with hotel rooms, there will also be a number of ultra-luxury apartments available for purchase.

As of yet, no pricing details have been given and there is no word on how much the ambitious build will cost to install.

The Dorchester London is part of the Dorchester Collection. It is owned by the controversial Sultan of Brunei, who imposed tough Islamic laws in Brunei in 2014 that will eventually include penalties such as severing of limbs and death by stoning, a move that sparked rare domestic criticism as well as international condemnation. 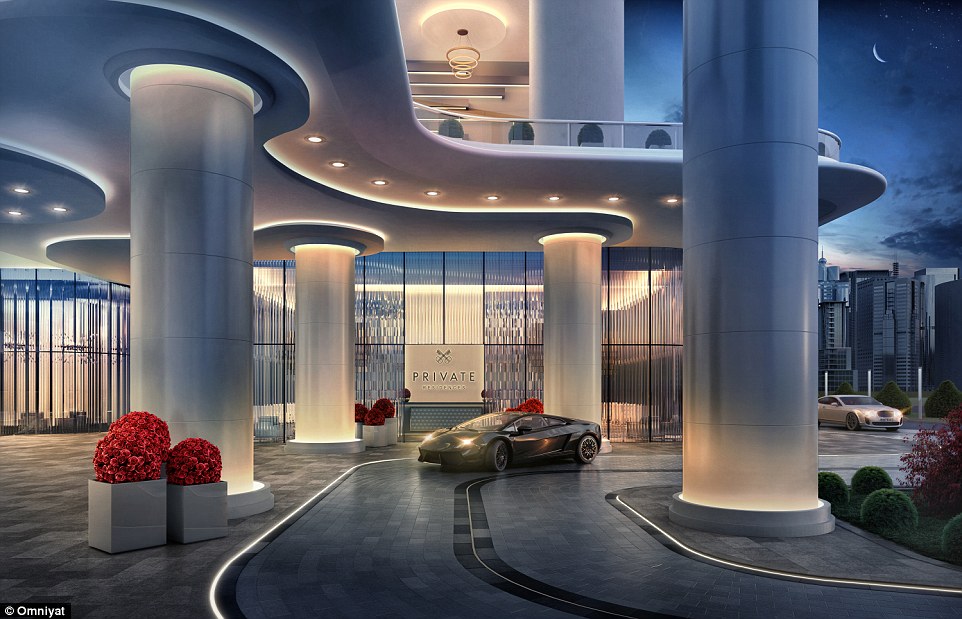 The building will also house a number of private residential complexes, which are set to attract high flyers 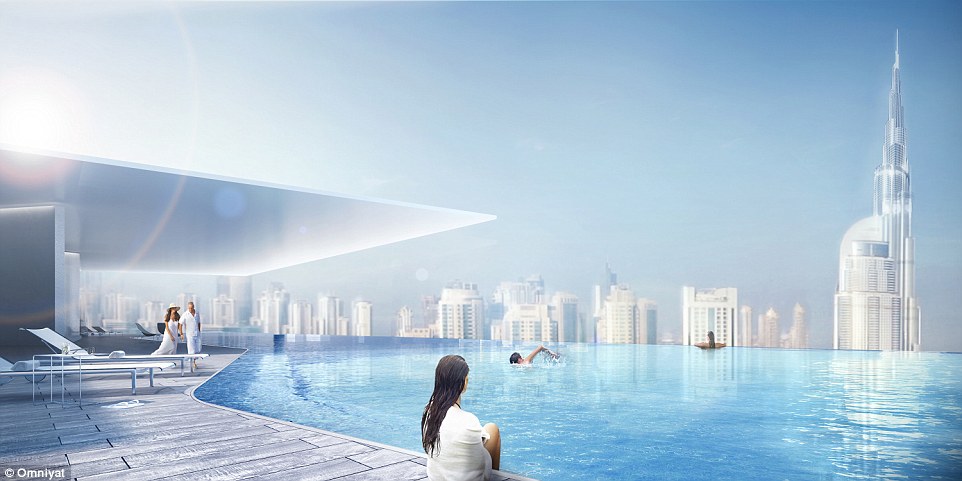 A computer rendering reveals that the Dorchester Collection’s Dubai hotel will feature a spectacular infinity pool on its roof, offering stunning views of the Middle Eastern metropolis 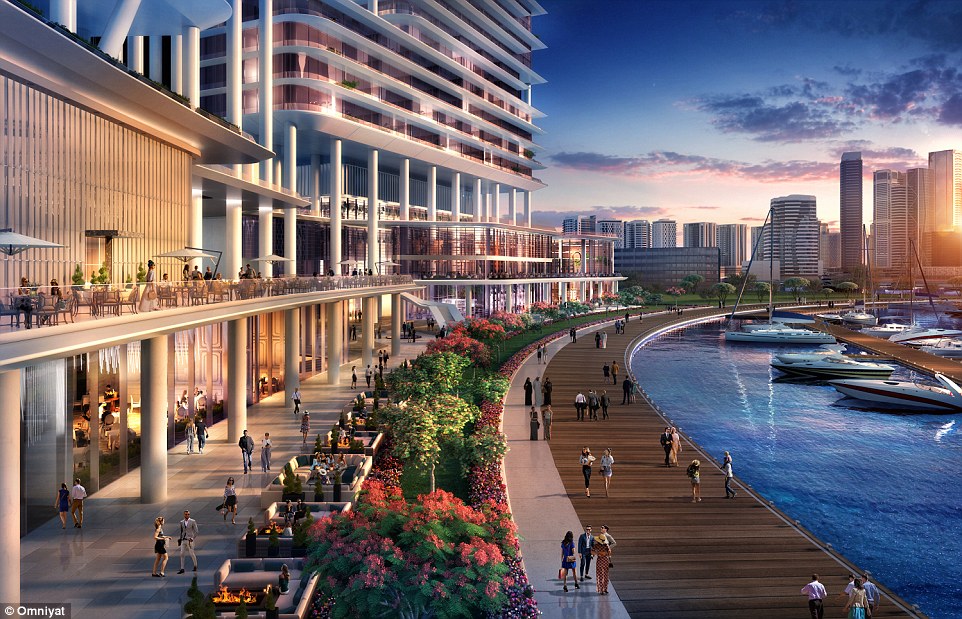 Other venues within Collection include 45 Park Lane in London, Coworth Park in Ascot, Le Meurice and Hôtel Plaza Athénée in Paris, Hotel Principe di Savoia in Milan, Hotel Eden in Rome and The Beverly Hills Hotel and Hotel Bel-Air in Los Angeles.

The new opening will be the first hotel complex to launch in the Middle East.

The project is being run in partnership with Omniyat, a Dubai-based property development company.

Commenting on the collaboration, the Dorchester Collection’s CEO Christopher Cowdray said: ‘We are delighted to partner with Omniyat with its global reputation for outstanding design.

‘This is our first hotel and residence complex in the Middle East and we look forward to bringing our distinct style of hospitality to this region.’

The project’s official name is set to be revealed later this month. 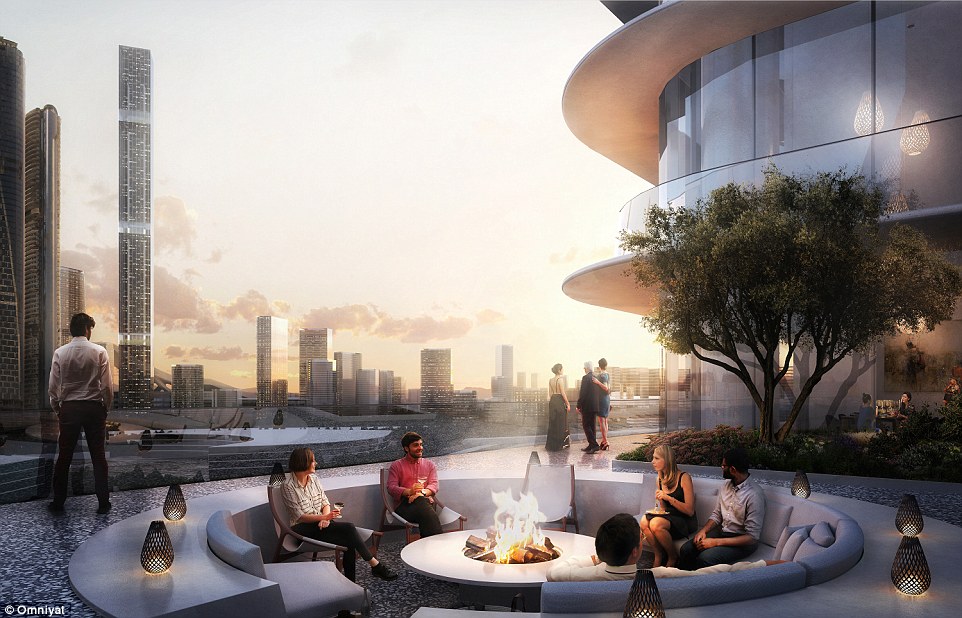 The hotel is set to include plenty of outdoor space for guests to relax in. The rendering above shows a lounge area, complete with circular seating and a fire pit 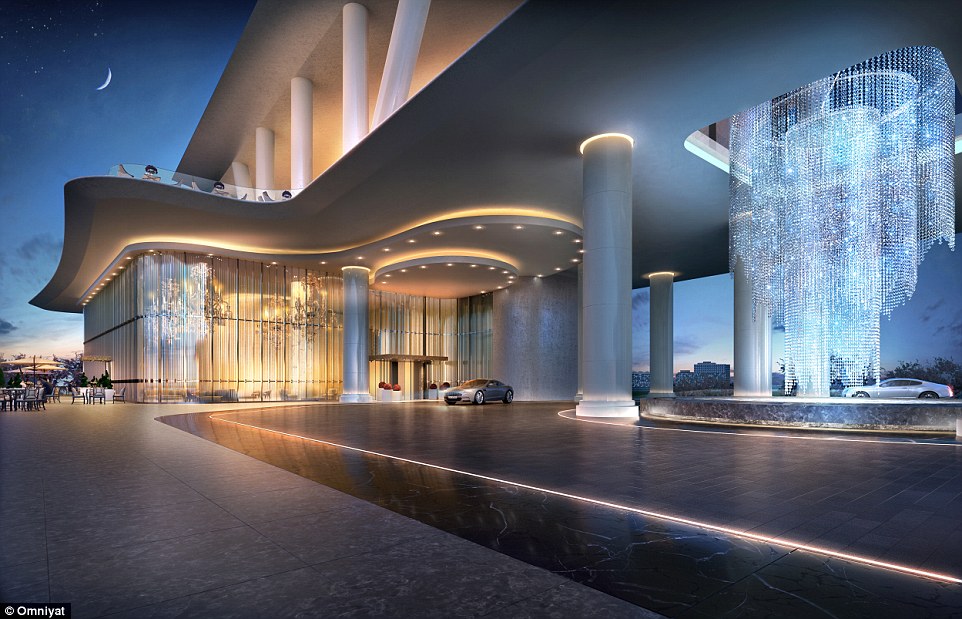 The lobby area of the Dorchester Collection’s new Dubai premises looks ultra-chic, with an impressive chandelier, spotlights and grand columns 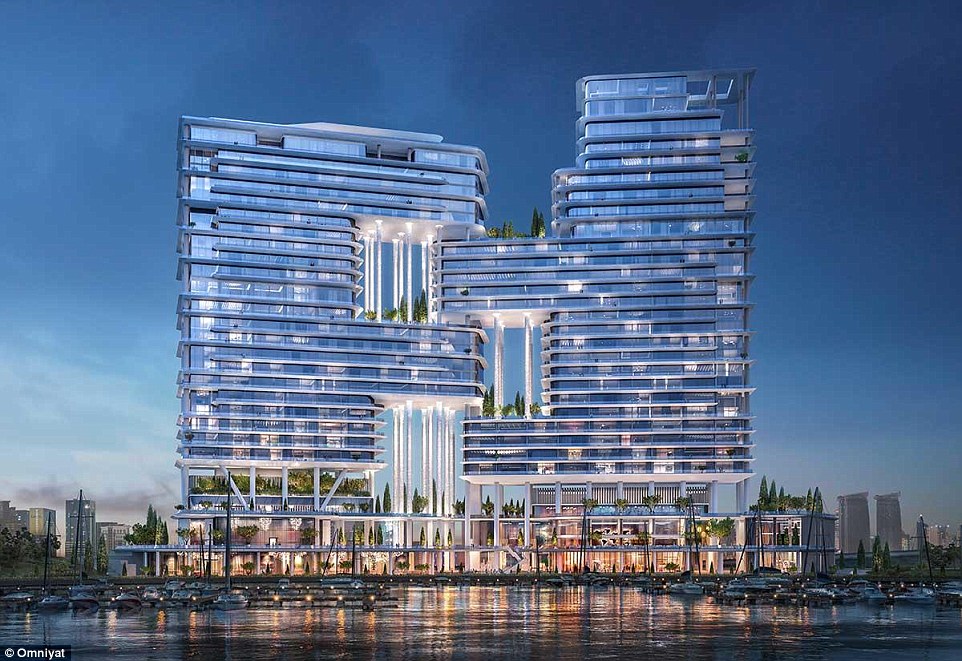 Hilton has announced the opening of Lincoln Plaza London, the newest addition to Curio Collection by Hilton, a global portfolio of more than 60 upper upscale, one-of-a-kind hotels and resorts. The hotel echoes the sleek architectural cues of Canary Wharf, […]

London Gatwick has launched a new route to Shanghai, giving British passengers direct access to an area responsible for a third of China’s imports and exports. The first flight of the new service, operated by China Eastern, departed Gatwick at […]

Heathrow has reported strong passenger growth for October, up 4.4 per cent on the same month last year. Almost seven million passengers travelled through the airport, bolstered by the half-term getaway, marking two years of consecutive record monthly volumes for […]

Taj Hotels has expanded its footprint in the Middle East with the full-opening of its second hotel, Taj Jumeirah Lakes Towers. Located in Dubai, the hotel is the fusion of a century old legacy, seamlessly woven together by worldly contemporary […]

Air Astana will launch services between Almaty and India’s commercial centre, Mumbai, on June 1st. Flights will be operated four times a week using Airbus A320, with a sector time of 4.5 hours in each direction. On Mondays and Tuesdays, […]

Hyatt Hotels has welcomed the opening of the fully renovated 280-room Hyatt Regency Barcelona Tower. The property is being positioned as a gateway to the city’s new financial district. Connecting travellers between Barcelona’s international airport and city centre, the opening […]

Lodz has been selected to host the European Route Development Forum in 2021. As the main stage for Europe’s leading airline decision makers, Routes Europe will provide a platform for the third largest city in Poland to demonstrate the significant […]

Best Western has revealed plans to open Europe’s first Sadie hotel in Luton. Opening this summer, the concept will take the hotel group’s portfolio to over 280 hotels in the UK. The new Sadie hotel is set to create over […]